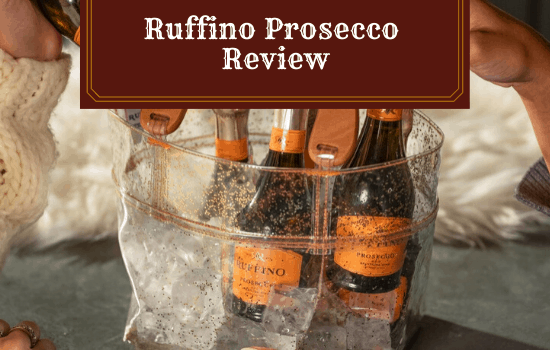 Catching onto that festive spirit is Ruffino Prosecco, which has made a splash by announcing a package including a stylish, transparent designer purse, marketed towards both Americans and those living in the UK.

You may wonder why a wine company would be selling a designer purse, or why it’s transparent. In fact, the clear exterior is the beauty of the design, as it showcases six bottles of Ruffino Prosecco. With golden tint labels, the concept is to add a glamorous statement.

The price point? One hundred dollars.

But Ruffino Wine, despite this marketing program, typically does not delve into the world of luxury, nor does a good deal of celebratory Prosecco people tend to consume. Topping the 2019 ranking by Wine Enthusiast is no other than a twenty-dollar bottle of Prosecco, Nino Franco NV Rustico Brut. From Italy, it’s celebrated as exhibiting a crisp finish, with energetic sparkling acidity flavours, pear, apple, lemon drop, orange zest notes, and soft white floral aroma.

While it’s incredible to see a twenty-dollar bottle of sparkling Prosecco topping a list of over twenty thousand options, affordable popular Prosecco in of itself is nothing new. Long an alternative to the fine bubbles of Champagne, which can come with a heftier price tag, Prosecco is beloved for its spring profile.

Though Champagne has a lower average price point than you might expect, at around fifty dollars per bottle, compare that with the average price of Prosecco Italian sparkling wine, at twelve dollars.

In fact, Prosecco making best-of lists often is under thirty dollars, if not twenty. While this isn’t to advise searching for the most inexpensive Prosecco available, it does showcase just how accessible Prosecco can be.

As for Ruffino Prosecco? Take away the designer handbag and you can purchase their bubbly for eight to twelve dollars a bottle, coming in around average to a below-average price point, and allowing many to celebrate without breaking the bank.

But is Ruffino Wine any good, and is it a wise choice for your next celebration? In this review, we’ll cover the company, wine sold, and everything you need to know to make your decision. We’ll start by addressing frequently asked questions, both about Prosecco sparkling white wine and Ruffino Prosecco in particular. 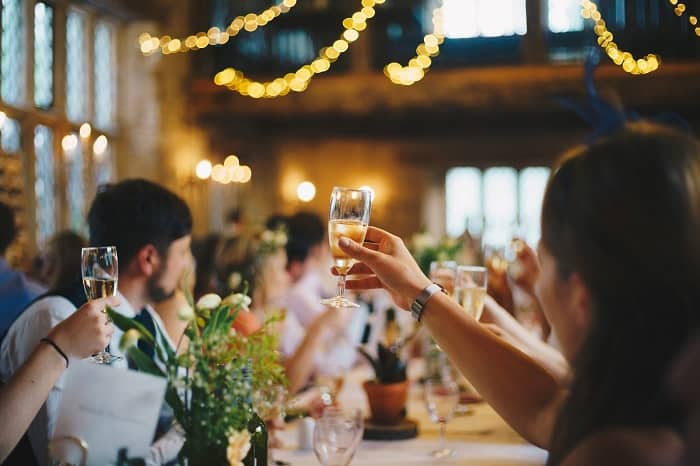 Is Ruffino Prosecco a type of Champagne?

Ruffino Prosecco, as is the case with other Prosecco, is not Champagne. It’s not uncommon for consumers to be unaware of the differences between Prosecco vs Champagne, as often the terms are used (incorrectly) interchangeably. In fact, while both are a bubbly, or sparkling wine, they originate from different places and exhibit unique characteristics.
– For bubbly to be considered Champagne, it must come from the Champagne growing region in France. Champagne, on average, can cost up to four to five times the average price point of Prosecco.
– Champagne is comprised of Chardonnay, Pinot Noir, and Pinot Meunier Grapes, whereas Prosecco most commonly is produced from Glera grapes.
– Prosecco has grown in popularity amongst Americans more rapidly than Champagne, yet Champagne still comprises a larger share of market sales
– When it comes to qualities, Champagne, as a general rule, tends to be a bit drier, and Prosecco exhibits more present fruitiness.
– Champagne is normally produced using a traditional method, whereas Prosecco is commonly produced using the tank method.
– Common flavor notes of Prosecco are playful and fruity, such as pear, apple, and honeysuckle. Champagne has a more present yeast profile, with toasted flavors accompanying citrus. Finally, Champagne’s bubbles can be a bit sharper and more pronounced.

Is Prosecco healthier than wine?

There’s has been a degree of back and forth when it comes to wine and its impact on our health. Health benefits are links to naturally occurring antioxidants, anti-inflammatory characteristics, and possible associations with improved heart health.
The drawbacks, of course, pertain to the detrimental impacts of consuming too much alcohol. While many studies exemplify a glass wine per day, while some dispute it.
•But when it comes to the difference between Prosecco vs wine, we need to clear up a few misconceptions. For one, Prosecco is a type of wine; it’s considered bubbly, or sparkling wine. Sparkling wine does not inherently have more or fewer health benefits. The main difference would be the level of residual or added sugars, but all wines, both sparkling and regular, range on a scale of very brut to sweet.
•Another difference, however, can be found in calorie count: on average a bubbly like Prosecco is markedly lower in calories than a glass of regular wine, with an average of eighty vs over two hundred calories per glass. In this way, Prosecco tends to be more diet-friendly. Some brands are al

What is Ruffino Prosecco?

Ruffino Prosecco is a brand of Prosecco sold worldwide and through outlets such as Drizly and Total Wine. While it does originate from Italy, it’s relatively inexpensive and enjoys a degree of name recognition.

Ruffino Prosecco is owned and operated by Constellation Brands. Constellation Brands owns numerous brands not only for wine but also beer and other spirits. The parent company has been in operation for over seventy years and is based in the United States.
Founded in 1945 as an individual wine producer on upstate New York, Constellation Brands has now considered a Fortune 500 company, who’s earned workplace awards for health, LGBTQ equality, innovation and citizenship awards, among others.
While still headquartered in New York, Constellation Brands now has corporate offices across the US, most prominently in California, as well as overseas connections in Italy, New Zealand, Switzerland, Mexico, Australia, China, Hong Kong, and Canada.
They have implemented sustainability initiatives; partnered with nonprofit groups such as the Foundation for Advancing Alcohol Responsibility and the Federal Trade Commission’s We Don’t Serve Teens. Suppliers are also held to sustainability standards.
Constellation Brands is not BBB accredited. Despite its seven decades operating, at this time Constellation Brands is not accredited through the Better Business Bureau, though it holds an unofficial A rating, based upon five complaints closed within the past three years. We’ll dig more into ratings for Ruffino Prosecco later on.

Is Ruffino Prosecco a Good Option For My Next Celebration? And What Do I Need to Know in Order to Make My Decision? 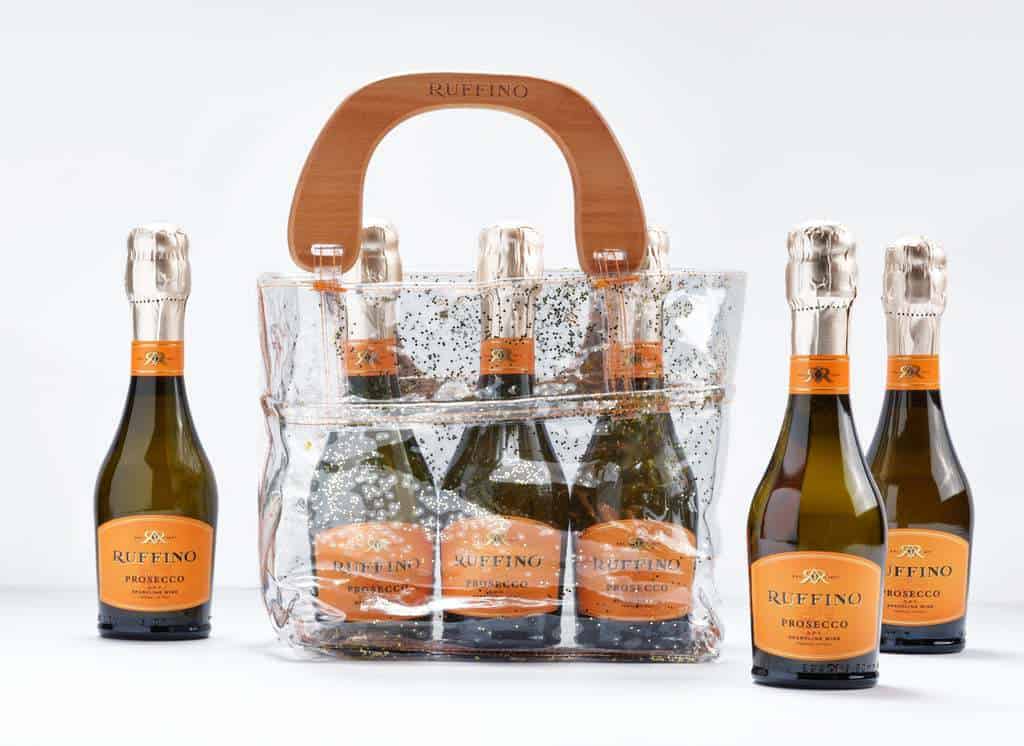 Let’s examine exactly what Ruffino Prosecco is, and how it lines up compared with other Prosecco on the market. When determining if the wine of any kind is worth its price point, there are a number of factors you’ll want to consider:

The label on Ruffino Prosecco indicates “NV,” meaning nonvintage. Ruffino is a young Prosecco, but before you pass judgment one way or the other, let’s examine how aging affects Prosecco. Keep in mind that not all wines are better aged, and also that personal preferences come into play whether you’ll prefer aged or young wine.

Are there any details about the aging and proofing process?

Ruffino Prosecco is aged for approximately one month to develop a balance between flavor and retain that youthful acidity. The Charmant Method is used, which consists of naturally occurring fermentation in tanks using yeast.

That’s a common, inexpensive method used for a variety of sparkling wine. Typically (though the information is not given here) the wine is kept pressurized to retain signature carbonation.

Is this a blend?

No. Ruffino Prosecco is one hundred percent Prosecco, as it should be. Steer clear of blends.

Where does it come from?

Valdobbiadene is a prominent growing region is Veneto, Italy, situated below the Alpine-Dolomite and known for its cool climate and famous for Prosecco. That’s a good sign for Ruffino Prosecco. Cool climates tend to produce more vibrant acidity and structure, which suits bubbly like Prosecco well.

Is there a way I should serve Ruffino Prosecco?

Prosecco, and Ruffino Prosecco, in particular, is best served at a cool forty-eight to forty-five degrees Fahrenheit. That helps make the most of the carbonation, keeping it cool and crisp but not so cold it numbs the effect. 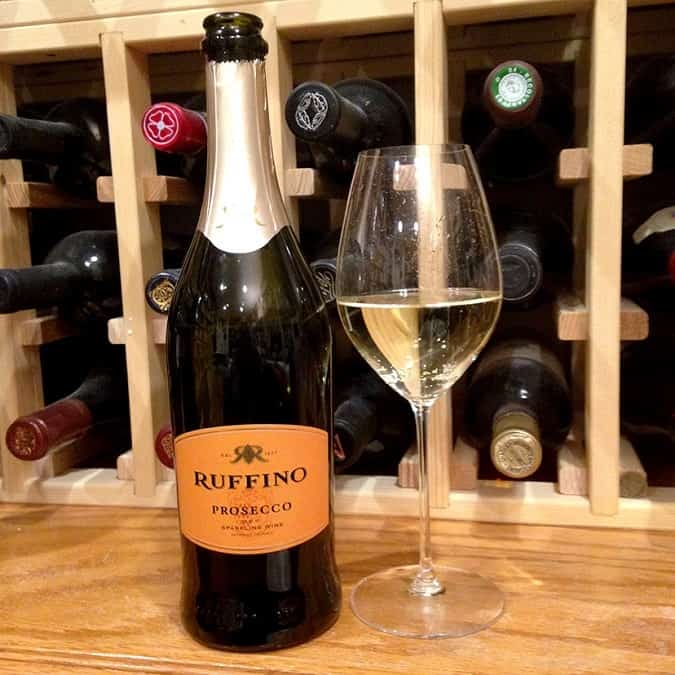 Ruffino Prosecco presents with a straw yellow, which is within the color range of what you’d expect. Prosecco in general ranges from pale, almost clear with a yellow tint to straw yellow.

How sweet is it?

Prosecco, as a rule, ranges from Brut to Dry, though its fruity profile and effervescent presence as sweet. Brut is the least sweet and contains up to twelve grams of sugar per liter. Ruffino Prosecco is considered Extra Dry, which means it has present sweetness but it not cloying sweet.

While some prefer drier sparkling wine, many not accustomed to wine, or using it for celebratory purposes, tend to prefer it a bit sweeter to complement the fruity profile.

What is the overall flavor profile?

The flavor profile, and how we experience the wine of any kind, is multi-faceted. Specifically, we discuss flavor notes, aromas, overall profile, and also other important characteristics, including the level of acidity, structure, body, and finish.

Is there any information about the soil it was produced?

There is no immediate information available about the soil type, though the growing region provides some clues. The growing region of Valdobbiadene exhibits diverse soils, but most prominently rock, sand, and clay. Without knowing the specific location, it’s difficult to deduce the impact of soil on the wine’s profile, but this is what we do know:

In fact, it’s hard to know the specifics of how it’s produced. While providing a general growing region is helpful, we also knew that Ruffino Prosecco is under the large parent company, Constellation Brands. With over one hundred different brands it produces, it’s more difficult to pinpoint specifics of the wine production as you might see with a single, smaller producer. In all likelihood, this is what we would consider “bulk wine.”

Is there anything else I should know about Constellation Brands?

We already covered some of the company information, as well as its commitment to sustainable practices, but upon further investigation, it is good to know there was a controversy with the parent company in 2010.

What do customers have to say?

Amongst customers, Ruffino Prosecco appears to deliver, averaging four to four and a half out of five stars based upon several review sites. By most, it was described as clean, crisp and refreshing, with just the right level of moderate sweetness. The few complaints mentioned that the flavor was rather subdued and is better paired with food than consumed alone.

Is Ruffino Prosecco a Good Bet for Bubbly Suited for a Celebration?

In all comes down to value, and for its price point, Ruffino Prosecco mostly delivers. It’s not the finest Prosecco, so it’s best served with appetizers, but it does exhibit pleasing flavors and aromas and delicate bubbles, suited enough for general festivities.

The largest drawback is perhaps its connection to the larger parent company. While one controversy nearly ten years ago, for a company large as it is, is not a deal-breaker, we’d also like to see it be accredited.

Finally, it’s also nice to practice to support smaller growers, and Ruffino Prosecco comes from a gargantuan company. That doesn’t make it a bad Prosecco, but it’s not the very best on the market. In a pinch, for a reasonable price point, there’s enough information and customer satisfaction to make it a reasonable choice.