When it comes to fine French wines, there’s some fierce competition. And something that perfectly showcases that is the ongoing debate over Bordeaux vs Burgundy. Before this July, Burgundy was known to hold exceptionally expensive prices for the very finest wines–which have now been surpassed by Bordeaux.

Liber Pater, an esteemed producer of Bordeaux wines, prides themselves on upholding authenticity, both in the wine itself and in the entire process, from cultivation to bottling. The plow used to farm and maintain is a century and a half old and pulled with a mule. Foraging, only one hundred percent French oak barrels are used, and there’s great detail paid to every step of the process.

And that hard work and especially attentive approach have paid off. Loïc Pasquet, the owner and proprietor of Liber Pater, is due to release a 2015 vintage Bordeaux wine for a stunning thirty-four thousand dollars (about thirty thousand euros) per bottle. 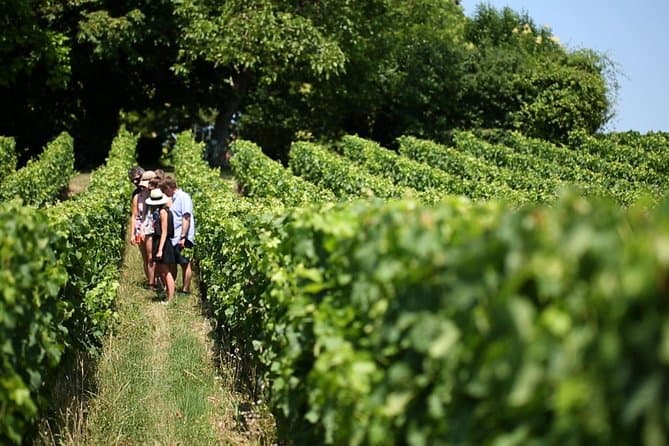 Domaine de la Romanée Conti’s Romanée-Conti Grand Cru, up until now considered the most expensive wine in the world for the past half-decade, fetches an average of just over twenty thousand US dollars.

But luckily these are the very extreme ends of Burgundy and Bordeaux wine, with many affordable options and more competition in terms of flavors than price point. But even if you’re looking for high quality, modestly priced bottle of wine, you might be wondering what the rivalry between Bordeaux vs Burgundy is all about, and what’s even the difference between the two.

In this article, we’ll cover these two fine French wines and tell you everything you need to know to understand the difference, no matter if you’re more drawn to Burgundy or Bordeaux.

The Main Differences Between Bordeaux wine vs Burgundy wine are:

What do Burgundy and Bordeaux refer to?

When we’re discussing the difference between Burgundy and Bordeaux, we’re actually comparing two regions, and the wines produced there. As you can imagine, there is variation even within specific regions as to what wines are produced, but when trying to identify the difference between Burgundy vs Bordeaux, we’re talking about the general characteristics of the wine produced in those regions.

While both are an esteemed French wine region, there are some key differences, which we’ll be covering.

What are the different French wine regions? There are twelve French wine regions spread across the country, all of which produce signature tasting wines that are prized for different reasons: Alsace, Bordeaux, Burgundy, Beaujolais, Champagne, Côtes du Rhone, Jura Languedoc, Loire Valley, Médoc, Provence, and South-West. Ten of those are considered major wine regions, are two minor regions.

With the influx of competition from wines around the world, especially after the early 2000s, the French wine industry is making efforts to revitalize by promoting tourism, but also by devoting more time to the development of some of the finest wines in the world with painstaking attention and small scale production.

I keep seeing the word ‘cru’. What does it mean?

Cru signifies the finest and most esteemed vineyards in France. For a vineyard to be labeled as Cru, it must meet certain specifications. There are different levels depending on the specific region.

While wines with these classifications will run you higher in price, they are also widely thought to be among the best wines in Burgundy and Bordeaux. The rating refers to the prestige of the vineyard, but also the production method and level of experience. Of course, there are many fine wines that do not come from a vineyard of the highest possible classification.

Are Burgundy and Bordeaux located near each other?

And how much wine does each produce?  Burgundy is situated in Eastern France to the west of Saône, which is an off branch of the Rhône River. It’s considered a fairly modestly sized wine-growing region, accounting for an estimated thirty thousand hectares, twenty-five thousand of which are officially classified.

Bordeaux is actually in Southwest France and includes the city of Bordeaux, which is located on the Garonne River. In comparison, it’s a far larger wine region, with around one hundred and twenty-five thousand hectares of vineyards.

While Burgundy is known for some of the most precious and esteemed wines, it actually only accounts for about three percent of French wines produced. As many as nine hundred million bottles of wine are produced in Bordeaux a year, making it one of the most popular wine regions in the world.

Is one region esteemed over the other?

We’ve already hinted at this, but there is a difference in public perception between Bordeaux vs Burgundy. Bordeaux, with such high production of wine, has really made a name for itself as a wine region, one which many across the world come to tour. Within the wine region of Bordeaux, of course, is also the city of Bordeaux itself.

Consequently, when many think of French wine culture, Bordeaux, with its popular tours, cones to mind.

Burgundy, in contrast, is known to produce some of the world’s finest–and most expensive wines, and to be the symbol of the very best of French wine.

Neither depiction is entirely complete. While Bordeaux is undeniably a popular place to tour, the very fine wines produced there should not be discounted. And while Burgundy does indeed produce expensive wines, there are also many affordable options, as well as plenty of wine culture.

Is only one kind of grape grown in Bordeaux and Burgundy, respectfully?

No. Bordeaux and Burgundy both grow a variety of grapes, which is partially where the difference lies.

Besides the actual variety of grapes grown, what are some of the main differences between Bordeaux vs Burgundy wines? And why do they exist?

Climate, soil, and method of cultivation, as well as classification, and of course different varieties impact the main differences between the two French wine regions.

First, let’s go over the differences between the two regions.

There is a notable difference in climate, which accounts not only for how the wine itself tastes, but the great discrepancy in grape varieties grown.

Burgundy is a temperate, cool climate. Summers are warm, with cold winters; hail and too much rain are the greatest concerns. While cold temperatures can be a concern for some years as well, the grapes grown there are especially accustomed, and even suited to cooler climates.

In general, as is the case for cool climates in general, that wine produced in Burgundy tends to be lower in alcohol, higher in acidity, and lighter in the body.

Bordeaux, by comparison, is a relatively warm climate. The region is known for mild winters, warm but normally not excessively hot summers, and heavy rainfall during the Spring.

As warm-climate grapes, Bordeaux wine tends to be lower in acidity, fuller in body, and more ripe fruit flavors.

Soil also impacts quality and cultivation. You’d be surprised at what different soil types make, even if we’re discussing the same grape variety.

Bordeaux soil consists of limestone, along with gravel and sand mixtures. This type of soil is suitable for a large variety of grapes, which in part explains a great deal of diversity.

Burgundy also has limestone, but also some clay. Chardonnay thrives with Jurassic Limestone, which is unique to Burgundy.

Since both have limestone as a base for much of the soil, the main difference is the sheer variety and gravel and sand vs clay. Wines produced on clay soil tend to more rounded, while wines produced on sand and gravel tend to be higher in alcohol levels.

The very process of how wine is grown and produced is the main difference between Bordeaux and Burgundy. Though of course there are variations depending on the specific example:

Bordeaux wines have a large output, to say the least. In fact, on average, Bordeaux produces four times as many wines as Burgundy does. The sheer variety also means there’s a good deal of range in terms of both quality and prices, with some wines being more mass-produced. The most signature wines of the Bordeaux region are Bordeaux blends.

Bordeaux blends typically are comprised from the three main grapes of the region–Cabernet Sauvignon, Merlot, and Cabernet Franc, though occasionally Malbec and even Carménère is added to the mix. White Bordeaux blends are made with Sauvignon Blanc, Sémillon, and Muscadelle.

Burgundy, on the other hand, consists of cultivation on smaller plots ad is normally producers wine through smaller cooperatives. The smaller scale is also more focused: Pinot Noir and Chardonnay are the main stars. There are fewer wines produced here, and also less variation.

Bordeaux blends differ also in terms of general flavor notes, compared with Burgundy wines. That is in part because of the different grape varieties, but also in terms of climate and cultivation techniques.

Bordeaux red wines are known for different tastes depending on their specific variety.

In general, they feature fruity notes with puckering tannins, and flavors such as dark berries, vanilla, licorice, and coffee. They have a pleasing balance of sweet dark fruit notes with more dry notes and a bit of soft spice to create a full and balanced wine. Those which feature Merlot more than Cabernet Sauvignon tend to be richer and smoother. White Bordeaux blends, on the other hand, are noted for lemons, citrus (such as grapefruit, orange, lime) and a bit of sweeter, rich notes like honey and vanilla, Still, these tend to be refreshing but pleasant with just the right amount of complexity.

Bordeaux wines, in general, tend to be more balanced, and pleasant to drink. While not all of them are of the highest quality, they tend to be popular for their affordability, general ease with food pairings, and variety. They also tend to be a bit fuller, and affable.

In comparison, Burgundy wines can be more flavorful and unique, featuring bright acidity and mineral notes. It’s easier to go wrong with a Burgundy wine in some ways because many of them can risk becoming too acidic if it’s a year for less than ideal conditions. Burgundy wines, as lighter, sharper and more pronounced, simply tend to leave a more pronounced impression. They also, as we’ve mentioned, tend to be both less mass-produced, and subsequently, less affordable as well.

How do I decide between Bordeaux and Burgundy wine?

Neither Burgundy or Bordeaux wine is inherently better. It all depends on preferences. For red blends, or if you like the taste of Merlot or Cabernet Sauvignon with richness and balance, look at Bordeaux wines. Bordeaux wines may also extend your budget more.

For crisp, acidic and bright wines, especially Chardonnay, Burgundy is a better bet. Burgundy is also better for earthy notes with classic red fruit or citrus notes. And finally, you’ll have an easier time finding very unique and smaller-scale production wines in Burgundy.

Do you have suggestions for the best Burgundy and Bordeaux wines at an affordable price?

While the wines in both of these regions that are considered the very best tend to be vintage and can run hundreds to thousands of dollars, there are also many excellent mid-range options that will still provide a taste of the classic flavor notes, richness, and pronounced acidity.

Is Pinot Noir a Burgundy?

Is Claret the same as Bordeaux?

Is Burgundy wine dry or sweet?

The character of the Burgundy wine is mostly dry, full-bodied and with complex earthy flavours.

Prosecco vs Moscato Compared: With Lovely Selections of Both!

The Best Organic Wine Guide – What Are The Benefits?