Gewurztraminer and Riesling both have deep roots in Germany and other parts of Europe. Gewurtztraminer vs Riesling are very similar varieties. In fact, one of Riesling’s parents is believed to be the Traminer grape.

While these two wine varieties are very similar, Riesling tends to be more popular, more approachable, and more accessible. Gewurztraminer stays close to home with only a few other growing locations throughout the world.

Both are sweet wines with strong aromatics, while Riesling has a much higher acidity and Gewurztraminer has higher alcohol content. However, the inexperienced nose and palette won’t be able to tell much of a difference between these two wines.

Main Differences Between Gewurztraminer vs Riesling

The main differences between Gewurztraminer vs Riesling are:

The name Gewurztraminer might turn you off, and rightfully so. After all, it doesn’t really sound like a great wine. It sounds more like a German beer, and not even a good one at that.

Poor Gewurztraminer has been stuck with its unfortunate name for more than 200 years, but winemakers have also had 200 years to perfect the art of Gewurztraminer, and I’m here to tell you just how great it can be. 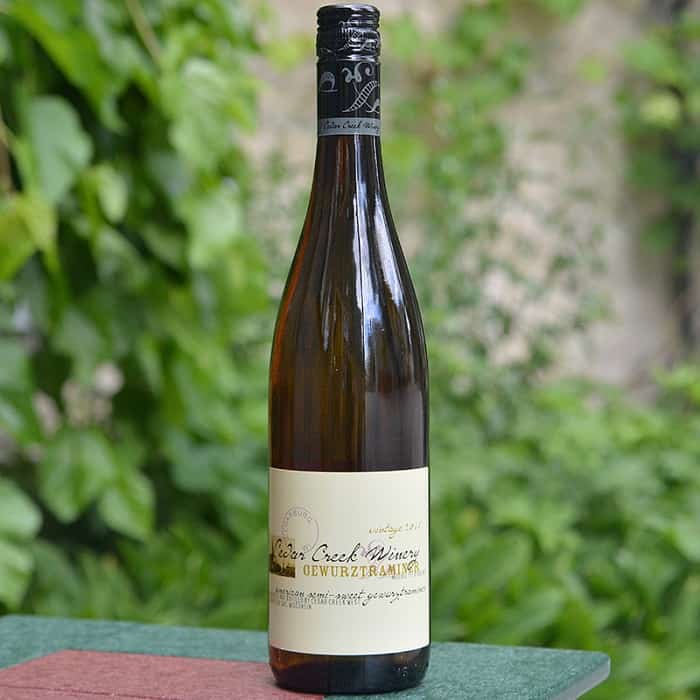 By the name, you might suspect that Gewurztraminer originated in Germany. It’s a pink grape, much like that of the Pinot Gris or Pinot Grigio. Since it was discovered, it has migrated through all of the Alps from Switzerland to Bosnia and everywhere in between. Today, you’ll find Gewurztraminer in Italy, Romania, Croatia, Hungary, France, and Slovenia.

The history of Gewurztraminer is tough to nail down. The Traminer grape is a green-skinned grape that gets its name from a town in northern Italy called Tramin. It’s a German-speaking province, and ampelographer Pierre Galet thought for sure the Traminer grape was the same as the Savagnin Blanc grape.

At some point in its complicated history, these grapes (either the Savagnin Blanc or the Traminer) mutated into what we know today as the pink-skinned Traminer grape. Galet thought this mutation led to Gewurztraminer. However, in Germany, there is no differentiation between these grape varieties or the wine they produce.

In fact, because Gewurztraminer made in Germany is so much less aromatic than that of the Alsace region in Italy, some believe that German vines are actually largely misidentified. Maybe Gewurztraminer didn’t originate from Germany after all?

One thing is for certain. Gewurztraminer did originate from a German or largely german-populated area, and wines appear labeled in both German and Italian. They come from a wine culture that is predominantly German, regardless of boundaries and borders.

It wasn’t until later that the “Gewurz” was added to the beginning – a German word meaning “spice.”

Gewurztraminer grapes are primarily grown in Europe, and they’re grown all over the region where they originated. That includes countries like Austria, Germany, France, Bulgaria, Serbia, Slovenia, Spain, Italy, Hungary, Croatia, the Czech Republic, Slovakia, Luxembourg, Turkey, and North Macedonia.

France is the second most popular place in Gewurztraminer’s growth. Better Gewurztraminer comes from the south of the Alsace region, which is one of the places it was first discovered. This Gewurztraminer d’Alsace can be very dry or very sweet. They make popular dessert wines.

Gewurztraminer in the United States is isolated to cooler climates like the Pacific Northwest, Michigan, Pennsylvania, and Rhode Island. However, you may also find it in parts of Texas, Missouri, and New Mexico. 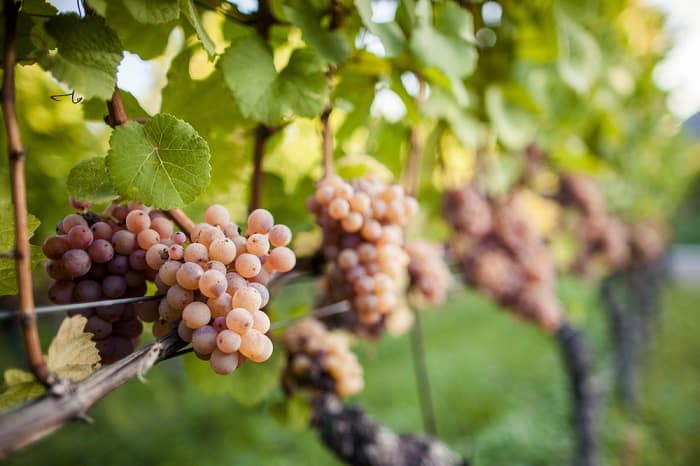 Gewurztraminer is alive with floral aromatics. It may also sometimes smell of honey, rose, ginger, allspice, cinnamon, incense, or smoke. It has a medium-low acidity and should be served chilled.

Gewurztraminer is very similar to Moscato. It’s fruity, but it has a much higher alcohol content so the aromatics are more noticeable. It also has lower acidity. These characteristics combined make Gewurztraminer a little bit harder to drink than something as fruity and sweet as Moscato, which makes it a bit more sophisticated.

The aromas and flavors are intense and complex. However, Gewurztraminer isn’t always sweet. In fact, the combination of sweet aromas, high alcohol, and low acidity make it taste sweeter than it really is.

Gewurztraminer pairs well with a lot of different foods. Surprisingly, it goes best with Middle Eastern cuisine because of the use of roasted meats, dried fruits, and nuts. The natural aromas of ginger will bring out the flavor of ginger and rose water in these foods.

You can pair Gewurztraminer with a variety of meats including chicken, duck, pork, bacon, crab, and shrimp. You may also pair it with vegetables like red onion, coconut, bell pepper, tempeh, eggplant, carrot, and squash.

If you like your wine with cheese, try Gewurztraminer with cheese that has a delicate, subtle flavor. To make the pairing even more exciting, add in some dried fruits like cranberries or banana. 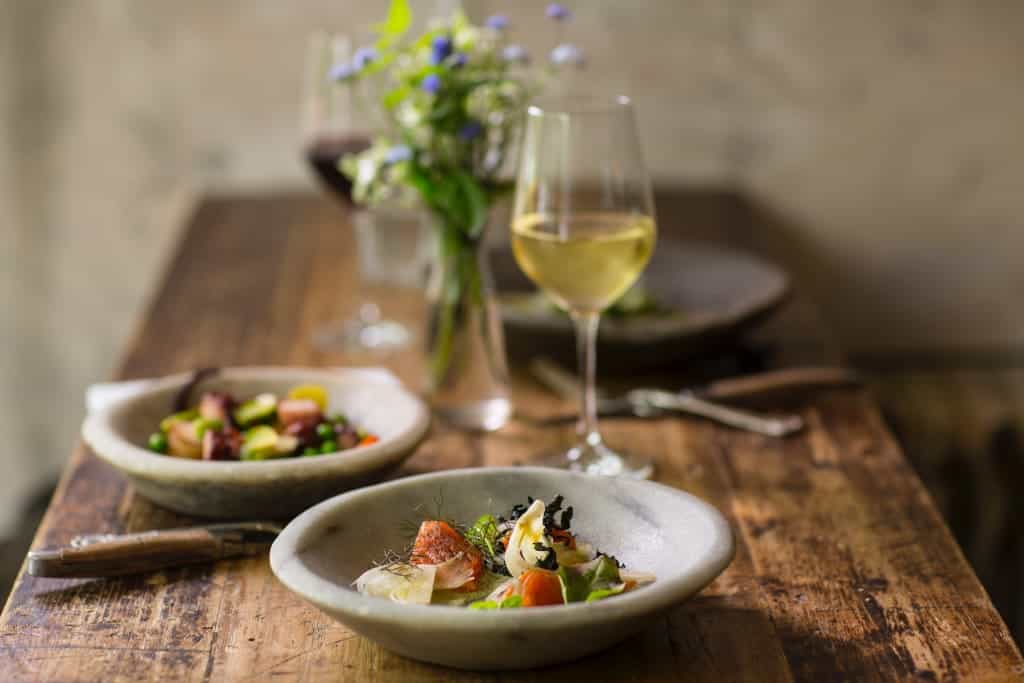 The Lucien Albrecht Gewurztraminer Reserve 2010 is from the original Alsace region. It has a distinct aroma of orange teriyaki sauce and a nice sweetness that is well balanced. The interesting flavor is a bit of sweet and a bit of sour immediately on your tongue, which smooths out as you drink. It’s a noteworthy Gewurztraminer that exhibits all of the traditional characteristics of the variety.

The Gundlach Bundshu Estate Vineyard Sonoma Coast 2011 is very dry, which is one of the trademarks of good Gewurztraminer. However, it’s a light option with a bright effervescence that will delight wine lovers who prefer the crispness of pear and lime. This one is from California, so it may be a bit more accessible than others.

The Hugel and Fils Gewurztraminer 2010 has a spicy scent of pepper that carries through to the flavor. The acidity is bright with a hint of bitter, but it’s balanced by the sweetness in the finish. This bottle is also from Alsace, so may be harder to come by, but worth the search.

Riesling is another German name, but it certainly doesn’t put as many people off as Gewurztraminer does. It’s a widely-grown grape with immense popularity all over the world. It’s approachable and fun to share with friends. 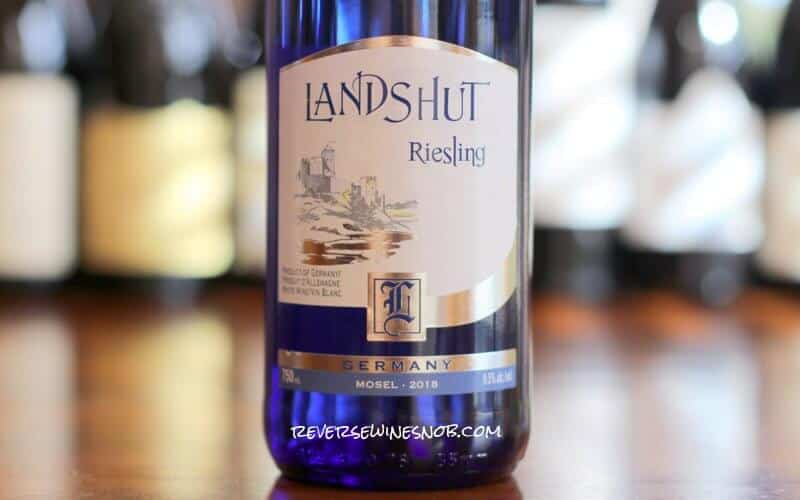 Riesling comes from the Rhine region. The Rhine is a major European river that flows through Switzerland, Germany, and the Netherlands. It is referenced as early as 1435. The modern spelling of the wine was first documented more than 100 years later.

Recent DNA fingerprinting of Riesling grapes has revealed that one of the Riesling parents is Gouais Blanc. This variety is rare today but used to be grown by both German and French peasants in the Middle Ages.

The other Riesling parent is a wild vine and Traminer cross. While both of these parents have a long history in Germany, it’s largely believed that Riesling came from the Rhine region. However, both parents are also found on both sides of the Adriatic, so it really could have happened anywhere.

There are also red-skinned versions of the Riesling grape, which some people believe may have mutated to form the white Riesling, and the genetic differences between the red and white Riesling are very small, much like the difference between Pinot Noir and Pinot Gris.

You’ll find Riesling regions all over the world. Germany’s most popular wine is Riesling. German Rieslings are never exposed to oak or aged in oak barrels. Because of the warmer temperatures in the southern regions, the Riesling is generally heavy with higher alcohol content. However, in northern regions, it tends to be sweeter with lower alcohol content. German Riesling tends to age very well.

More than one-fifth of Alsace vineyards grow Riesling. The soil here is very different than neighboring Germany, and because Riesling flavors reflect the soil where they are grown, it tastes very different, too. Wine-making methods in France differ from that of Germany, and French wines tend to have higher alcohol content. They’re aged in oak barrels and produce a rounder body.

Riesling can also be found in Australia. These Rieslings feature more citrus flavors with an oily texture. They’re better enjoyed young and don’t age as well as Riesling from Germany. 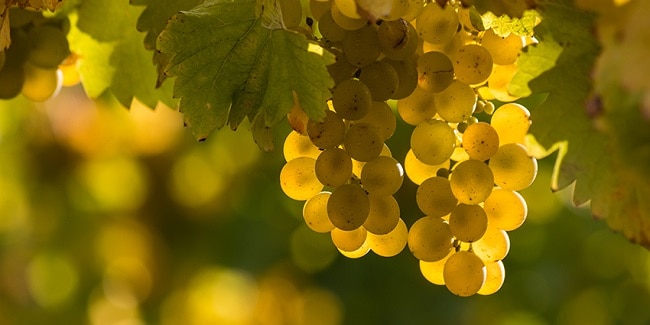 In the United States, Riesling vines are everywhere from New York to the Pacific Northwest and Michigan to Texas. Riesling grown in cooler climates is much sweeter than that grown in hot climates.

Canada has its fair share of Riesling as well, and the Niagara region produces almost as much of it as the entire country of Germany. Canada also produces a lot of ice wine out of its Riesling vines, which is possible because of the colder temperatures and the likelihood of the grapes freezing.

Riesling has intense aromas that aren’t suppressed by the wine being chilled. You’ll smell apricot, nectarine, pear, and apple. non-fruit aromas include jasmine, lime peel, and honeycomb. You may also find aged flavors like petrol, diesel, or lanolin.

Riesling is high in acidity, much like that of lemonade. It’s crisp and refreshing. Most Rieslings are very sweet, which helps balance out the acidity. Some can be dry and lean, but these varieties have only come about more recently. Traditionally, Riesling is intended to be sweet.

Because Riesling is sweet with high acidity, it pairs well with spicy food. It’s the perfect companion to Asian and Indian spices.

You can try Riesling with delicate cheeses or dried fruits, and it also pairs well with vegetables like red onion, bell pepper, tempeh, eggplant, carrot, and squash. 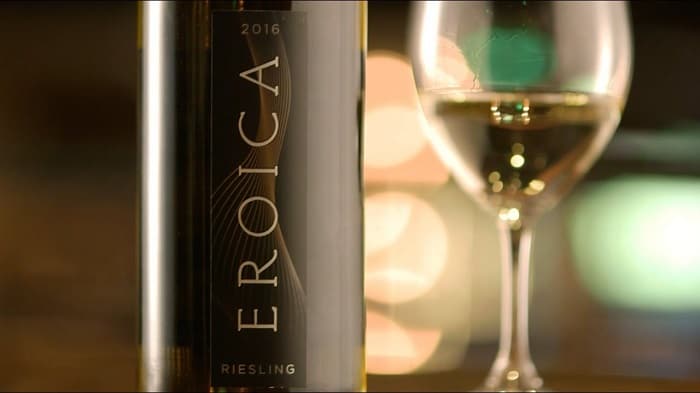 The 2018 Landshut Riesling is imported and sold at Aldi. You’d never believe that a fantastic Riesling could cost so little and be so widely available, but today is your lucky day. Enjoy aromas of apple, pear, peach, honeysuckle, and tropical fruit. It’s smooth and thick with good acidity and a sweet finish.

Once again, the Eroica Riesling, available at Costco, is widely accessible. Riesling is generally easier to find in large quantities than Gewurztraminer, and this is a great example. It has aromas of lime, tangerine, and green apple with a sweet, smooth mouthfeel. The finish is long and mouthwatering.

The deep flavor of the 2018 Nik Weis St Urbans Hof Estate Riesling from Old vines is simply decadent. The mouthfeel is vibrant. It has an aroma of lemon, apple, and tropical fruit with balanced acidity and sweet, juicy finish.

When you boil all of this knowledge down to the primary differences between the two, you’re left with Gewurztraminer that is richer and more lush with a silky, oily texture and a firm, dry finish. Riesling is vivacious with a hint of minerality and can be either dry or sweet, but it should have a crisp finish.

It’s likely that you’ve seen and tasted Riesling before because it’s so popular and easy to find. It’s versatile and accessible. Many people like it because of its easy-drinking qualities and the fact that it’s always relatively affordable.

If you have never had either of these varieties, chances are you won’t be able to tell much of a difference between the two. You can easily substitute one for the other without much fuss. However, some people do prefer one over the other for a variety of reasons.

No matter which you choose, you’re likely to be very happy with the drinkability of your wine. They’re both excellent wines that pair well with similar foods.

19 Crimes: A Review of the Brand and Its Fascinating Labels

The Best Yellowtail Wine Varieties – All You Need to Know!